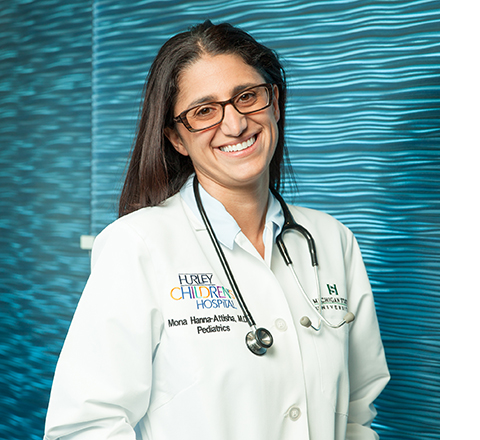 The Fries Prize for Improving Health award will be presented today at the American Public Health Association’s (APHA) annual meeting, which is taking place virtually. The award recognizes an individual who has made major accomplishments in health improvement with an emphasis on recent contributions to health in the United States. It is intended for an individual who has done the most to improve health for the greatest number of people. The Fries Prize for Improving Health award is $60,000. Hanna-Attisha will donate the entire award amount to Flint recovery efforts.

In 2014, Flint switched its water supply from Detroit’s water system to the Flint River. The water was not initially treated to prevent lead from leaking from the pipes into the water. When Hanna-Attisha learned of this she requested the state to share its data on blood levels in kids. When the states did not share their information, Hanna-Attisha began to collect medical records. Through her research, she found the percentage of kids with elevated blood lead levels increased after the water supply switch. With this information, Hanna-Attisha informed Flint residents of the danger. Initially, the state dismissed her claims but through more research, the state admitted her findings were correct.

Hanna-Attisha’s research led to action among local, state and national governments. A state of emergency was eventually declared. Federal involvement followed with emergency responses from the Environmental Protection Agency (EPA) and the Federal Emergency Management Agency (FEMA). Her efforts led to the first major update to the Lead and Copper Rule, which sets testing requirements for lead in drinking water, in 30 years. This update improved protocols for identifying lead, expanding sampling, and strengthening treatment requirements.

Hanna-Attisha advocated for Flint residents by ensuring that every Flint family had access to clean water while the pipes were being replaced. Through her work with Flint Kids, a fund that addresses and mitigates the impact of lead poisoning and trauma suffered by children in Flint, and as founder and director of the Michigan State University-Hurley Children’s Pediatric Public Health Initiative, she has worked on mitigating the impact of the Flint water crisis by evaluating and implementing nutritional, behavioral and social interventions targeted to the community. This initiative serves as a national resource for best practices. In addition, Hanna-Attisha has called out environmental racism and public health crises across the country.

Last year, Hanna-Attisha discussed her work in the water crisis and the community-centered work that is creating a better future for families and children in Flint in the CDC Foundation’s Contagious Conversations podcast.

“I have been impressed by Dr. Hanna-Attisha’s unwavering commitment to public health coupled with her passion to help children,” said Karen Remley, MD, MBA, MPH, FAAP, director, CDC’s National Center on Birth Defects and Developmental Disabilities, who helped champion Hanna-Attisha’s nomination for the Fries Prize. “Dr. Hanna-Attisha has worked tirelessly for the families of Flint to address the dangerously high levels of lead in their drinking water and developed a registry to follow these children throughout their lives to provide valuable information on the impact of high lead levels in water.”

Hanna-Attisha has testified three times before the U.S. Congress, been awarded the Freedom of Expression Courage Award by PEN America, been named one of Time magazine’s 100 Most Influential People in the World, and most recently been recognized as one of USA Today’s Women of the Century for her role in uncovering the Flint water crisis and leading recovery efforts.

Her widely acclaimed book “What the Eyes Don’t See: A Story of Crisis, Resistance, and Hope in an American City” is a dramatic story of the Flint water crisis and has become a timely playbook of resistance and hope. A 2018 New York Times 100 Notable Book, “What Eyes Don’t See” is the story of a city on the ropes that came together to fight for justice, self-determination, and the right to build a better world for its children.

“Dr. Mona Hanna-Attisha is an inspiration to all of us. Her dedication, advocacy, and perseverance are having a profound effect to keep children safe and improve the lives of all Americans. We are delighted to award her the Fries Prize for Improving Health,” said Judith Monroe, MD, president, and CEO of the CDC Foundation.

With concentrations in environmental health and health policy, Hanna-Attisha received her bachelor’s and master's of public health degrees from the University of Michigan. She completed her medical degree from Michigan State University College of Human Medicine and her residency at Children’s Hospital of Michigan in Detroit, where she was chief resident. She is currently a C.S. Mott Endowed Professor of Public Health and an associate professor of Pediatrics and Human Development at Michigan State University College of Human Medicine.

The James F. and Sarah T. Fries Foundation is a nonprofit corporation incorporated in 1991. The mission of the foundation is to identify and honor individuals, organizations or institutions, which have made great contributions to the health of the public. The foundation seeks to reward accomplishment rather than promise, practicality rather than theory.