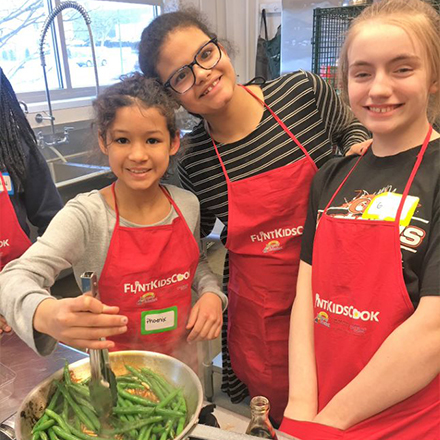 After Flint residents were exposed to lead in their drinking water, a Michigan State University College of Human Medicine professor helped launch a series of cooking classes for kids, hoping it would teach them the importance of proper nutrition.

It did that and more.

As the kids gained confidence in the kitchen, they began trying foods they previously would have shunned, a recent study found.

Beyond the nutritional value, the program had another benefit, according to a second study: the kids showed significant improvement in their emotional wellbeing.

“We don’t often consider emotional health in a nutrition program,” said Amy Saxe-Custack, PhD, Nutrition Director for the Pediatric Public Health Initiative, a joint effort between Michigan State University and Hurley Children’s Hospital, who helped create the Flint Kids Cook program and was lead author of the two studies. “Parents told us that their kids had a newfound desire to participate not only in food preparation but also in food shopping while participating in Flint Kids Cook. The children started to talk about food at home and during trips to the grocery store, where they would point out eggplant and artichokes and tell their parents how to prepare these foods. They were so proud of what they were making.”

The program, supported by grants from the Michigan Health Endowment Fund and the Stephanie and David Spina Family Foundation, began in October 2017. Classes are taught at the Flint Farmers’ Market by chef Sean Gartland, the market’s culinary director, and Sarah Egan, a registered dietitian.

“We didn’t know whether any kids would show up when the program was introduced,” Saxe-Custack said. “Not only did we have full classes, but the kids showed up consistently. They were excited about taking a class from a real chef.”

So far, 250 children – most of them from low-income families and between the ages of 10 and 12 – have taken the six-week course, which has been expanded to a second location, with a spin-off class called Flint Kids Bake.

The first study in the journal Public Health Nutrition found that the children and adolescents who participated in Flint Kids Cook showed significant improvement in their “health-related quality of life,” including “important changes in psychosocial health that were unrelated to dietary changes.”

The second study, published in the journal Global Pediatric Health, concluded that the classes had helped the participants improve their “food acceptance, dietary habits, and confidence in the kitchen” and could be used as a model for similar communities.

Chopping, mixing, measuring, and cooking became more than learning experiences. As the kids’ self-confidence and sense of achievement grew, they made friends, and their enthusiasm spread to their parents and other family members, Saxe-Custack said. Some showed interest in cooking as a career.

As the COVID-19 pandemic set in, the classes went online, and the nonprofit Flint Fresh began delivering food boxes to the homes.

“What we’re hearing is that it has become a time for families to cook together and eat together,” Saxe-Custack said. “That makes us feel as though it’s something really special.”