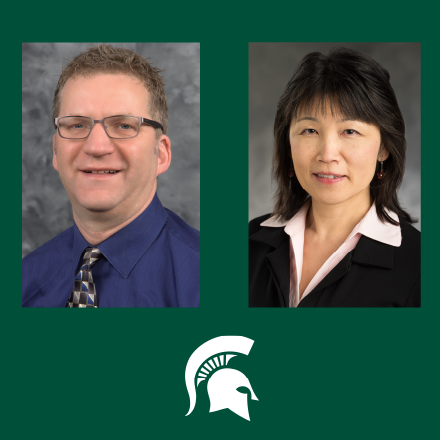 Lead exposure from contaminated water has gotten much justifiable attention lately, but another major source lurks in the dust of countless older homes.

That is why Masako Morishita, PhD, an associate professor of family medicine in the MSU College of Human Medicine, is heading a study of whether portable air filters can mitigate lead exposure and reduce lead levels in the blood of children who live in older houses. Robert Wahl, DVM, MS, an assistant professor in the MSU Division of Public Health, Master of Public Health Program, is co-leading the study.

The three-year study, beginning in December, is supported by a $700,000 grant from the U.S. Department of Housing and Urban Development (HUD).

Two portable air filters will be placed in each home, one in the living room and a second one in a child’s bedroom. Blood samples will be collected from each child at the beginning, midway through the study, and at the end to measure changes in lead levels, Morishita said.

The federal government banned the use of lead-based paint in houses in 1978. Still, HUD estimates that about four million American households have children under six years of age living in homes with lead exposure hazards. In Michigan, more than 20 counties, including Ingham, had elevated childhood blood lead level prevalence exceeding the state average in 2018.

That same year, more than 4,000 Michigan children were found to have elevated blood lead levels, an alarmingly high number, considering that only about 20% of the total population was screened.

“Despite significant lead abatement efforts made by local, state, and federal agencies, the number one source of lead exposure continues to be indoor dust from lead-based paint in homes built before 1978,” Morishita said. “So, we are very excited and grateful for this opportunity to assess the effectiveness of portable air filtration units as an intermediate tool for mitigating lead dust exposure and reducing childhood blood lead levels.”

Positive results, she added, could lead to wide-scale use of portable air filters in older housing as a way of reducing lead exposure and improving public health, particularly among children.

Wahl added, “this is especially important for families that are waiting for abatement of lead in their homes by certified professionals, which could take up to a year.”

Lead exposure can damage the brains and nervous systems in children, leading to delayed growth and development, as well as learning, behavior, and speech problems. No level of lead exposure is considered safe for children.

More than half the housing units in Michigan were built before 1970, so exposure to dust from lead-based paints remains one of the most significant indoor environmental threats for children, particularly in low-income and minority neighborhoods.

“The Flint and Benton Harbor water crises have certainly had a severe, negative impact on the residents of those cities and highlighted the risks of childhood lead exposure and poisoning from a polluted water supply,” Morishita said. “But on a statewide basis, the number one source of childhood lead poisoning continues to be indoor dust from lead-based paint in homes built before 1978.”